SPECTRES USE 2018 DEFEAT AS MOTIVATION 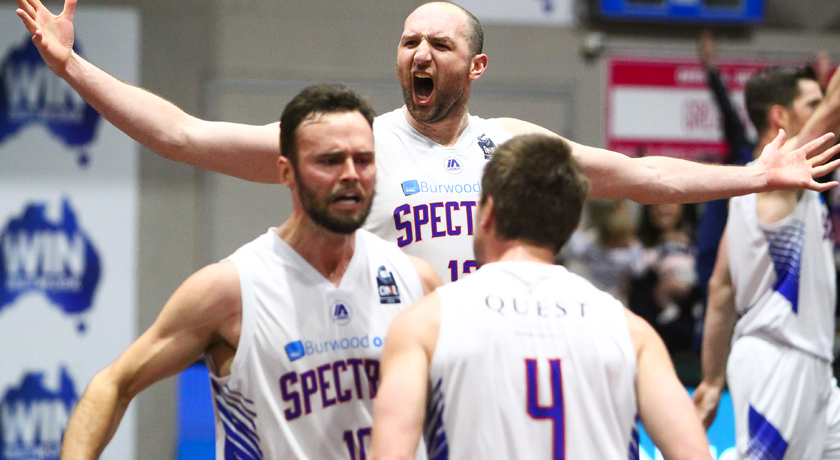 The Nunawading Spectres still have that painful taste of defeat in their mouths. And if they forget about it, Simon Conn will be sure to remind them.

If you’re wondering if the Spectres are using last season’s defeat as motivation for Saturday’s decider, the answer is a definitive yes, and it’s being led by one of the club’s mainstays.

“I don’t have to mention it because Simon Conn tells everybody all the time,” coach Dave Biwer said.

Nunawading has been a picture of consistent success in recent times, but their path to the Championship Game this year hasn’t been a smooth one.

Throughout the course of the year, the Spectres lost the likes of Tom Wright, Andrew Steel, Lucas Walker, Dain Swetalla and even coach Biwer due to 3×3 commitments and injury.

They also slipped to third spot, meaning they had to play two away games throughout the finals series.

All of the circumstances led to an over-pouring of emotion when Nunawading defeated top seeded Ballarat Miners in last week’s Preliminary Final. However, Biwer believes those celebrations contained more relief than joy, as they get ready to try and achieve the ultimate success.

“Once we lost second spot, that was a real cloud over our heads that nobody talked about,” Biwer said.

“No one spoke a word of it which, as a coach, I love that because I’m not an excuse guy, I hate excuses. Not one of them used it, not one of them brought it up even though I think they had it in the back of their minds.

“I can only imagine my emotions would have been similar to theirs in the fact that it wasn’t our best run up to a Championship Game. There would have been some self-doubt in there and I imagine a feeling of relief of getting to where we want to go.

“The reality is it’s not our end goal, the emotions wouldn’t have been, yes we made it to the Championship Game. It would have been more a relief, like hell yeah, we still got a chance of doing what we set out to do.”

When asked if he plans to harness that emotion leading into the Championship Game, Biwer is more focused on ensuring his players play their role, as opposed to changing things for one match.

“I just want to keep people focused on what they do,” Biwer said.

“I think that’s where people get in trouble, they get all this emotion inside them and they try do things that isn’t their go to. I think our guys are pretty good, so I’m happy there’s a lot of emotion there.

“I think my guys are pretty locked in on what their roles are and what their good at. I think that’s the key, is to stay focused on what you’re good at and not try and do something special come the Championship Game.”

The Braves have been NBL1’s fairytale side during the finals, coming from the eighth seed to make the Championship Game.

Bendigo has a familiar foe for Nunawading, with Mathiang Muo in top form. Muo played for Hobart last season and burned the Spectres for 20 points in the Championship Game.

Biwer says the Braves present a unique challenge, but it’s one they’re ready for.

“Deonte Burton, Muo and Ray Turner are putting a lot of pressure on the defence. If there’s any kind of adjustment or floor rotation, you got Dan Hansen and Chris Hogan making plays from the perimeter.

“They bring a tough guard to the game. We have to be great at individual defence and try and do our best at limiting people.”

Tip off between Nunawading and Bendigo in the NBL1 Championship Game is scheduled for 8:00pm AEST at State Basketball Centre. Tickets are available from Ticketek and the game will be live streamed on Kayo Sports and the NBL YouTube channel.