SPECTRES CLINCH BACK TO BACK TITLES 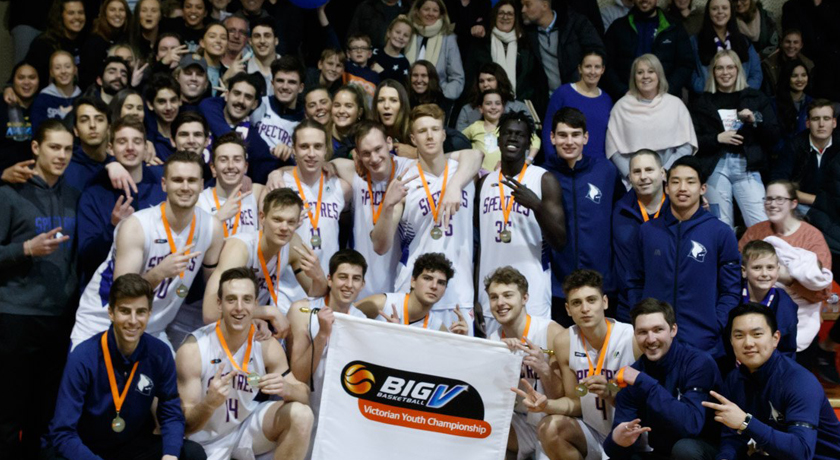 The Spectres entered Game 2 of the three-game series 1-0 up having stamped their authority on the series at Nunawading a week earlier. The second encounter wasn’t quite so dominant though, with the Wildcats – the minor premiers determined to balance the ledger.

A generous Nunawading contingent packed into Eltham High, as the Spectres took the early advantage thanks to some fantastic play by Joe Mutimer. Spectres Captain Daniel Baxter controlled possession off the glass and the visitors looked to settle into their game plan.

The Wildcats weren’t about to roll over, their home crowd motivating a sensational second term turnaround, pouring on 26-points for the quarter to take the lead into the half tie break. Eltham continued their good form into the third period, threating to pull away on a number of occasions – the Spectres able to counterattack each time though to stay within distance and trail by a solitary point at the final break.

The last 10-minutes presented Nunawading with a win or try again tomorrow scenario, with the team focussed on getting the job wrapped up then and there. The Spectres held a 4-point advantage with a minute remaining, only to send Eltham to the line for 3-shots to cut the margin back to 1. The Wildcats then forced a defensive stop presenting an opportunity to take the lead. Nunawading then stole possession back and Grand Final MVP Remo Simankevicius sealed the game at the free-throw line for the Spectres.

This is the second consecutive Big V – Victorian Youth Championship title for the Nunawading Spectres men, who boast some of the most exciting emerging talent in Victorian basketball.

A number of players have been given an opportunity to play and/or train with the Spectres NBL1 men’s program this season, who will now also contest the NBL1 Championship at the State Basketball Centre this Saturday night.